I know everybody is probably well and truly fed up of listening to my renovation tales. It has been a crazy but fulfilling couple of months. We are now inching ever closer to having the house completed exactly to the spec and design that we wanted. Yes it took a lot longer than I hoped, it also went over budget (that a whole other post!) and it probably did put some strain on marital relations! 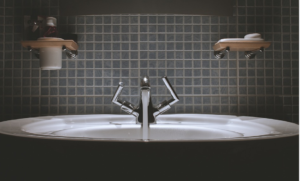 The space is teeny! Add to that the fact it will actual be quite a visible room being in the hallway. I wanted to keep the base neutral but jazz it up. I have visited a local show house and they had a feature wall where the toilet and cistern sat and I really liked it.  It added depth to the small space and almost made a talking point of it.  So off I went researching feature walls. Who knew there was so much choice out there! We ended up going for stone split face tiles in grey keeping with our neutral tones around the house. The tiles are are actually suitable for indoor and outdoors.

I would strongly advise ordering samples and trying them out in your space. I originally thought I wanted the exposed red  brick look but having taken a couple of samples home it just did not work when compared to the cool neutral tones around the house. Its funny  how something can look fab in a show room or even show house however we you take it back to your own house it just doesn’t work. That’s a really long winded way of staying take some samples home!

The Dada Fairy did the work himself which was great as he is in the building trade. However for the non DIY among us there are lots of helpful guides an how to tutorials online. I’m hopeless at DIY thankfully the Dada Fairy doesn’t mind tackling it otherwise we would probably be still living in a building site.

The bathroom is almost done and ill hopefully have a big reveal shortly.  I haven’t told him yet that I think he was probably right to push for the downstairs toilet!!!

Note: This is a collaborative post however I retain full editorial control

Spring is in the air – can you guess the flowers?!