The lovely people at www.magicsleepsuit.com sent me one of their Magic Sleep Suits for Little S to try out. The timing was perfect! We had just moved him from his moses basket and his swaddle wraps were now far too small. He looked so lost in the huge cot and his sleep became a lot more broken. Where had my sleepy baby gone! My first was a terrible sleeper so you an image my excitement when this newest man slept!!

When I opened the post with the help of the 3 year old who thinks every letter is for him, we immediately tried it on S for size, big brother was rolling around the floor laughing calling him a baby astronaut!! Picture below! 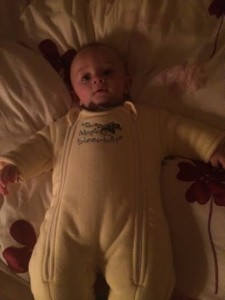 What is the Magic Sleep Suit – brilliant name for it! The woman behind the product is Maureen mother of four, pediatric physical therapist and founder of the Baby Merlin Company, a family owned and operated company. Maureen’s educational background includes a B.A. in Biology from the University of Delaware and a Master of Physical Therapy degree from Temple University. It was her first child’s lack of sleep which prompted the development of the Magic Sleep Suit.

The purpose of the sleep suit is to muffle twitches and startle-type movements that can wake them prematurely, instead keeping them cosy and secure making it easier to go to sleep on their own or fall back asleep if woken.

We began using this product as the weather started to get colder too, which was ideal as it really keeps the baby nice and toasty and no need for blankets.

I love this product, Little S like most babies loves to be cuddled up tight and he was not impressed at all with the cot. The third night after using this he was back to my sleepy content baby. Prior to this, once he was moved to the cot, he would put his comforter over his face or up against his cheek and I was so worried about leaving him unattended in the room. To get him to sleep he had to have lots of bits around him snuggling him up, I would take them away once he was asleep but if he woke during the night we had to do the same routine over again.

Using the Magic Sleep Suit gave me such peace of mind that he is kept warm and im not concerned he is pulling blankets or his comforter up over his face. It meant he could self settle him back to sleep if he woke up.  It is ideal for these cold winter nights too. As I have mentioned before we travel a bit between Dublin and Donegal and with something like the Magic Sleep suit it provides continuity for sleeping for the little man, he can drift off to sleep seamlessly in either location which for me is a mega plus.

I showed it to one of the girls at baby massage and she was going off to buy one after the class as she thought that it would be a huge benefit to her little girl who suffers bad with eczema and wont keep the mittens on night time, she believes the suit will let her have her hands free which she wants but not enable her to reach up and scratch her face. Fingers crossed it helps her too.

Overall, I love this products, the concept, the story behind the brand but most of all it does work. The Magic Sleep Suit is now available in Ireland and the UK from Amazon.

If you decide to get one – do let me know what you think.

Mamma F
Ps – I am trying to convince Maureen to make me an adult version!

Netflix – What we have been watching, April