Omega-3 and Vitamin D to Boost your Child’s Brain and Immunity!

Children need Omega 3 for every stage of their development. It boosts their brains, strengthens their immune systems and lifts their mood. It is also claimed to improve behaviour, reduce anxiety and helps to improve language. Sounds too good to be true – yet scientific research continues to show impressive results. We first began using Eskimo in 2015 and have used them almost every day since. I firmly believe that giving them the best start in this respect is critical and will stand to them long term. Kids are busy, between school, activities, play dates etc. We want them to preform to the best of their abilities and I really do feel that supplementing is a viable alternative. I simply couldn’t get the quantity of fish into the boys that I would like so for me the best alternative was a high quality fish supplement. I have done my research, I have spoken to other mothers online and in person and the brand that was mentioned most was Eskimo 3. 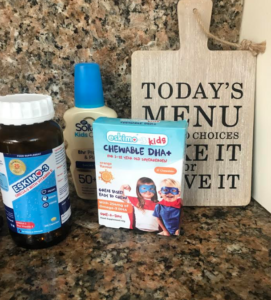 Ready for the day, Omegas for adults and kids. Plus our sun-cream another essential component.

Omega-3s are important for every cell in the body, but for children, most of the research has focused on their role in promoting healthy brain development. Omega-3 fatty acids are the most critical building blocks of the brain – they are considered essential and must be obtained through diet or supplementation. Without these important fats, it can become difficult for children to concentrate, learn new information, and balance their moods properly.  DHA in particular is recognised as essential for normal brain function. It helps to improve membrane fluidity, which means that nerve impulses, or messages, are transmitted more effectively.   In animals, low brain DHA results in changes in behaviour and is associated with learning problems and memory deficits. In humans, studies indicate that DHA supports normal IQ and preserves learning and memory. Perhaps its the accountant in me but I like to do my research, I do read up on things to make sure I am making informed decisions. Lets face it, its our kids future I feel like I owe it to them to give them the best start in life I can. Having spoken with the lovely people at Eskimo 3, my attention was drawn to some important research which is summarised below.

A review of 7 different studies which reported on the results of DHA supplementation on school performance, found that 5 of the studies showed DHA improved school performance, including learning ability, reading and spelling.(1)  In a 2012 study (Richardson et al) found that Omega 3 DHA had a profound improvement in reading age, concentration and learning ability in children. Lower levels of DHA were attributed to poorer reading and impaired performance.(2)

One 2013 study by the University of Cincinnati College of Medicine looked at how boys responded to Omega-3 DHA. Omega-3 DHA is as important to our brains, as calcium is to our bones. It accounts for 97 percent of the omega-3 fats in the brain. In the study, (McNamara RK et al) showed that subjects who consumed less DHA had slower reaction times and exhibited lower levels of concentration compared with subjects who consumed more DHA.3

A recent 2017 article reported that eating oily fish or fish oil supplementation in pregnancy may be a strategy to prevent infant and childhood allergic disease, whilst a study in infants from birth to 6 months found that omega-3s were able to modify markers of immunity and potentially be protective against allergies.(4,5)  In addition, Bisgaard et al. reported a significantly reduced incidence of persistent wheeze or asthma at ages 3 to 5 years in children whose mothers took fish oil during pregnancy.(6)

All of this indicates that consumption of omega-3 during pregnancy by the mothers or intake of omega-3 in infancy may well be able to help reduce the incidence of allergic diseases, including asthma. However it is really important if you do have any concerns around allergies that you do consultant a professional such as Premier Allergy & Asthma. Premier Allergy & Asthma can also assist with conditions such as eczema or hives.

How much is required?

The European Food Safety Authority (EFSA) state that you need 250mg DHA daily to support healthy brain function. Eating oily fish twice a week (think SMASH – salmon, mackerel, anchovies, sardines and herring) will provide a healthy dose of omega-3 EPA/DHA.  Since it is almost impossible to get children to eat enough fish to meet the requirements, it’s smart to supplement their diet with a premium Omega-3 supplement such as Eskimo-3 Kids. If I get one fish meal a week with cleaned plates its pretty close to a miracle here.

Vitamin D for Bones and Immunity

Vitamin D, the “sunshine vitamin”, is well known for its role in building strong bones and teeth. It’s not just about bones though. Vitamin D is needed for a healthy immune system – helping the body to fight off infections, making it a very important supplement during back to school time. The Irish Osteoporosis Society has called on parents to keep vitamin D intake top of mind. Some 88% of primary school children in Ireland have been reported to have vitamin D intakes below the recommended amount. Kids who do not get sufficient calcium and vitamin D are at increased risk for rickets (softening and weakening of bones in children, poor growth).

A Danish study has confirmed positive effects of fatty acid supplementation on behaviour and cognitive function in children. Children were given Eskimo-3 Kids containing a combination of omega-3, -6 and -9 fatty acids with added vitamin D3 for 4 months. Children in the various test groups showed significant improvements in a number of indicators where problems already existed.

In our house, the oldest prefers the chewable tablets, the youngest isn’t keen on the texture but he doesn’t mind the taste of the tutti frutti liquid so he takes that. The great thing is one a day. I leave them out the night before so we never forget after breakfast to take them.  That’s the grown ups and the kids.

The thing is, the kids have set a very good example and now both myself and the Dada Fairy have added Omegas to our daily routine too. He has seen some really good benefits with his joints. Working in a very physical environment means his joints are put under a lot of pressure and he has notices a marked improvement. 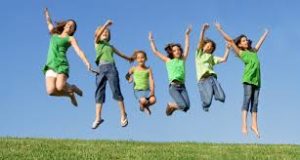 So thanks to the kids, we are now too being much more conscious about taking out vitamins. After all, we need to set the good example.

Be smart, give your child Eskimo-3 Kids daily!

Taking a daily fish oil supplement, naturally rich in omega-3,-6 and -9 plus vitamin D, can support your child’s brain, bones, immunity and skin and is a simple way to safeguard your child’s health.  Eskimo-3 is committed to delivering safe, sustainably sourced, effective omega-3.  I can certainly say in this house that boosting immune systems definitely seems to be a major benefit. At 6 my oldest has had 2 antibiotics in his life time.  I really feel that taking Eskimo 3 for nearly his entire 6 years is a major contributing factor.

Exclusive to Health Stores, Pharmacies and online. www.eskimo3.ie Don’t forget for 20% off use the code MAMMAFAIRY20.

Note: This post is a collaboration – but if you look back to 2015 you will see we are long time fans of the brand and can speak of its benefits with years of genuine use. Also please note – i’m not a medical professional just a satisfied mamma so always seek advice from trained individuals such as Premier Allergy & Asthma if you need further information.

What to look for in a good after-school club