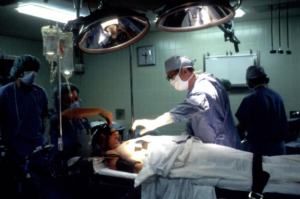 Putting your trust in someone to cut open your body, and leave it in a suitable condition, is pretty terrifying. Heading to surgery, and waking up paralysed, is something we never think will really happen to us. But, for some people, these nightmares became a reality at the hands of Christopher Duntsch, or Dr. Death.

Compensation for a spinal injury wasn’t enough for Duntsch’s victims, who later saw this criminal put on trial. So, what truly happened during these nightmare surgeries, why was this allowed to happen, and what was the outcome? Find out, right here…

Christopher Duntsch is an American surgeon, who trained to become a neurosurgeon. During his five-year surgical training, he ran two labs, and raised millions as part of a grant. After completing his surgical residency at the University of Tennessee, it was clear that he would amount to great things.

Little did everyone know that a psychopath was in the making…

It soon became clear that Duntsch was operating under the influence of drugs. Not only that, but he had only completed a few hundred surgeries during his training, when most residents would complete thousands during their time. An email to a friend during the early stages of his career demonstrated his wish to become a cold-blooded killer… he certainly lived up to this statement.

Duntsch’s negligence over the course of just a few years left tens of patients with severe, long-term damage, and two dead. Whether he thought he was actually the best, and was blinded by his arrogance, or was deliberately trying to maim people is uncertain. What we do know is that he ruined many lives, and cut two lives short, in just a couple of years.

What Were Some of Dr Death’s Worst Deeds?

To get a full picture into the dastardly deeds of Dr Duntsch, some real-life examples are probably in order. Here are some of the most documented and notable cases of Duntsch’s life-altering botched surgeries…

During Dr Duntsch’s time as a surgeon, there were two fatal surgeries which left the victims in severe pain, and soon dying of their injuries. The first of these women was Floella Brown.

After going into surgery at his hands, Floella’s vertebral artery was slit. According to doctors involved in the surgery, they were absolutely aghast as they observed what he was going. One surgeon even felt he had to step in to stop him causing more damage. But, it was too late; the damage had been done, and Floella suffered from a fatal stroke due to her injuries.

As Floella Brown lay on her death bed, Duntsch went almost straight into his next surgery on Mary Efurd. This routine procedure was aimed at fusing two of her vertebrae together.

After awaking from the surgery in excruciating pain, and no longer able to move her legs, Dr Duntsch was nowhere to be found. Instead, a new doctor, Dr. Henderson, had to re-enter Mary’s body to fix what had gone wrong.  On reopening the wound, Henderson could see pretty clearly what had happened; she’d been completely butchered. Instead of drilling into her bone, Duntsch had drilled into her muscle, sliced a nerve at the root, and had left screws sticking out all over the place.

Ever since this horrifying experience, Mary has been confined to a wheelchair. Today, as an 80-year-old woman, she can barely stand up for more than 10 minutes before needing a rest.

Jerry was Chris’ childhood friend, who had been a keen sportsman. After attaining a football injury, Jerry ended up with a back problem, and trusted his old friend Chris to surgically correct it. Despite their close friendship, this didn’t stop the deranged Duntsch from completely altering Jerry’s life. 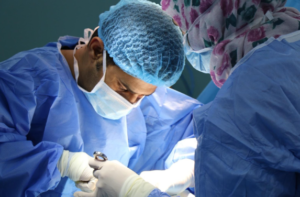 After going into surgery for a routine anterior cervical fusion, Summers woke up unable to move from the neck down. Despite Duntsch assuring him it was all down to the swelling, and he’d heal soon enough, Summers never recovered. Ever since, he’s been a quadriplegic with incomplete paralysis, meaning he can’t move but can still feel pain.

Although Duntsch’s surgical rights were temporarily suspended after Jerry’s surgery, that didn’t stop him from getting back into business. His next surgery after returning was on Kerrie Martin; a surgery that would prove fatal.

After falling in the kitchen, Kerrie ended up with chronic pain in her back, and sought surgery to help her live her life as normal again. When her GP X-rayed her to see what was wrong, a herniated disc was discovered. None the wiser to Duntsch’s reputation, the doctor handed them his card, referring them to him for the surgery.

After an initial consultation with Chris, they felt confident that he would be able to alleviate her pain, as it was just a simple, routine surgery. What Duntsch promised would take only 45 minutes stretched across hours. When Duntsch came out of surgery claiming there had been some complications, Kerrie’s husband could never have prepared for what would happen next.

On waking up from surgery, Kerrie’s conditioned seemed to worsen pretty quickly. She died not long after. A medical examiner confirmed that, when Duntsch had gone into surgery, he’d sliced a prominent artery, and Kerrie bled out internally.

During Jeff’s spinal surgery, he awoke to discover that Duntsch had removed part of his spinal cord! This left him completely paralysed on the right-hand side of his body.

Jeff Glidewell was another victim of Duntsch who was a little luckier than some of the others. During surgery, Duntsch supposedly mistook Jeff’s oesophagus for a tumour, and sliced into it, leaving his voice almost permanently damaged.

It didn’t end there though. To quench the bleeding, Duntsch put a sponge in the area, and then sewed him up with this foreign body still inside him. This meant Jeff had to undergo emergency surgery, which he thankfully survived from.

Jackie Tory also suffered damage to her vocal cords, which ended up causing permanent issues. On leaving the surgical room, Jackie’s vocal cords were paralysed, meaning she can now only talk in low rasps.

Philip Mayfield had been a truck driver, and he loved his job, but the constant loading and unloading of heavy objects meant he required back surgery. After consulting a number of doctors, it seemed that anterior cervical discectomy surgery, to remove the damaged spinal disc, would alleviate his problems.

Philip didn’t want to get it wrong, doing thorough research before landing on Duntsch. His glowing record made him the ideal choice, and after an initial consultation, Phil was fully confident in Duntsch’s abilities.

After going in for this routine procedure, Philip came out unable to move from the neck down. He was transferred to another hospital where they did further tests and discovered he had been paralysed. The pain he felt was excruciating, and an MRI showed that Duntsch had completely deformed Philip’s spine, leaving permanent damage.

Finally, and certainly not lest, is Lee Passmore. He also had part of his spine removed during a routine operation for back pain. Now, he has been left with crippling nerve spasms which make him feel as though an ice pick is being jabbed into his back. He struggles to get from A to B without these incessant pains.

Why Was Dr Death Not Dealt with Quickly?

You’re probably wondering how this man got away with such horrific and psychopathic acts, right? Although Duntsch left two maimed patients, and one dead, at the Baylor Plano hospital in Dallas, Texas, nothing was ever done about it. How could all of this have happened right under peoples’ noses?

Many believe that, if Baylor had reported him, the ordeal would have been cut short, and many people could have been saved. Although the hospital has never provided an explanation as to why Duntsch wasn’t reported, there were a number of reasons this may have occurred, including:

Where is Dr Death Now?

This is all pretty scary, and you’re probably thinking, “where is Duntsch now?”. Well, despite the delay in Duntsch’s comeuppance, he was finally given his due. After the damage he’d inflicted on Brown and Efurd, Henderson reported Duntsch, and he was fired. But, the Texas Medical Board, and those higher up, were not persuaded to take action. Then, after being bought on by the Dallas Medical Centre, several more months of carnage led to two physicians complaining yet again.

Finally, Duntsch was brought to trial for his misdemeanours, and was charged with five counts of aggravated assault, one count of harming an elderly person (Mary Efurd), and more. He is the first surgeon to go to prison for a botched surgery, and has been facing a life sentence since 2017.   All four of the hospitals where Duntsch committed his crimes have been hit with civil lawsuits. What’s more, after Duntsch’s arrest, multiple more people came forward claiming they had suffered at his hands. With all this coming to light, it’s now become very clear that the medical system needs an overhaul to bring psychopaths to justice.

Pretty crazy, right? It’s hard to believe that all of this was allowed to continue for so long, without anything being done to stop it.

If you want to learn about Christopher Duntsch in greater detail, the Dr Death podcast is a great one to listen to. Otherwise, leave your thoughts and fears in the comments down below, and let me know what you think!