We wanted to go on a short city break over the October school mid term however, I left it a little late to book. A couple of hours on Skyscanner, €120 lighter we were off to Eindhoven with Ryanair. I knew very little about Eindhoven apparently for the football team PSV and its links to DAF and Philips. 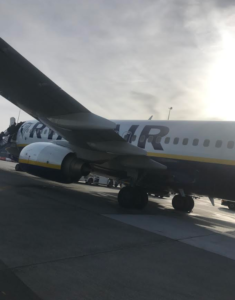 One of the things that struck me most as we came into land in Eindhoven is how much green space there. I don’t know why but I didn’t expect that at all. The airport is located only minutes (8km) from the city which is brilliant couple with the flight over just over an hour long, making it the ideal city break destination. 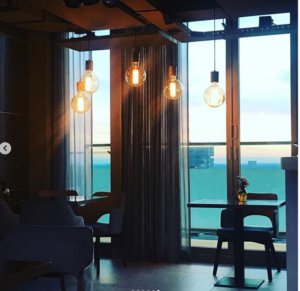 When we started researching Eindhoven there were lots of accommodation options from chain hotels to boutique hotels to B&B’s. I used booking.com and got an excellent deal at NH Collection. it’s a five star hotel, in the centre of the city with stunning views from the breakfast room an another floor up again for Vane Sky Bar.

The room itself was plenty big for the four of us an spotlessly clean. The breakfast was plentiful an that view. I could have spent hours staring out the window. The night we arrived the lovely Rik at Vane made us some seriously impressive cocktails. I do have to compliment the staff here, it was busy with the early after work crown and our family was made so welcome.

There are some cocktails on the menu at Vane designed by the World’s Best Female Bartender Tess Posthumus. We were there quite early in the evening and didn’t try the food here but I can imagine it gets very busy at the evening progresses. Its uber trendy and the panaromic view of the sun setting over the city is a lovely way to chill after an evening sight seeing. 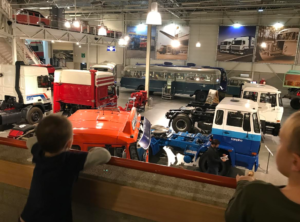 Our time in Eindhoven was short so we left it up to the boys what they wanted to do. It’s funny their own choices really do sum up themselves. The oldest wanted to go and visit the PSV stadium and the youngest the DAF museum. After a huge breakfast we headed first for the DAF Museum which was about 15 minutes walk from the hotel. This building is so deceptive. It looks small from the outside but once you get inside it is anything but. It’s fabulous, we began with a coffee over looking the vehicles and my youngest was hopping on the spot with excitement to get exploring.

The first thing that struck me when we walked in was that the place is immaculate, the vehicles are immaculate. It’s so well done inside, from the vehicles arranged in key milstones, the square with its own pub, to the top floor with a huge array of cars from the 1920 onwards.

The week we were there, the DAF museum were putting the finishing touches to their new exhibition spaces extending to over 1,100 square metres. We had a sneak peak and it’s a great addition brining the next phase in DAF’s history incuding trucks from the 1990 and 2000’s.

My boys truly loved this museum, its was right up their street. The Dada Fairy was equally enthralled being in a similar business himself. Our entrance was kindly gifted however at €9 for adults and €4 for kids age 5 up, under 5 free, this is a very good value and I can see why it is regularly ranked top of Trip Advisor ratings in Eindhoven. 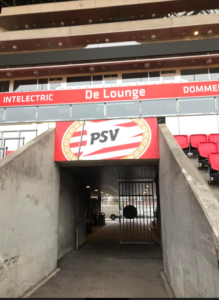 When we departed the DAF Museum, it was pouring rain. The oldest was anxious we do the PSV stadium tour so a quick google told us the only tour left that weekend was that afternoon. We walked the 30 minute walk across the city and just about made it on time.

I will admit I am not much a football fan but it was high on the wish list for the oldest, who is a total football addict.

We began by heading through the turnstiles and straight to the players seats. Sure what football fanatic wouldn’t love that sitting on the seats some of his idols had been. From there we would our way through the tunnels into the changing rooms, both the visitors and the home team. The psychology is fascinating of the differences between them. We also had a nosey in the corporate boxes, players lounges, training room and probably the kids favourite – the press room!

When the tour was complete, your ticket entitled you to a visit to the museum, a discount in the shop and a drink in the sports bar on site with a viewing area over the pitch.

Despite not being a football fan I really enjoyed this tour even in the pouring rain. It is pricey at €16.50 for adults and €14.50 for kids but all four of us enjoyed.

Top Tips When Travelling by Car With Children