Complications with second pregnancy meant I spent more time in the Coombe Hospital than I care to remember, as a result I read a huge amount to pass the time. Mr Ewan the Dream Sheep appeared in lots of articles and blogs and I think I developed some kind of weird obsession with him! 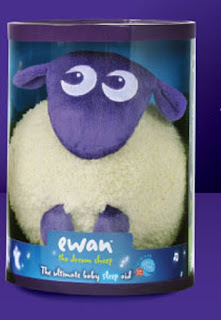 My first barely slept until he was 2, a stretch of 2-3 hours was a good night. Therefore anything the promised to help sleep, I was hooked! With that in mind I headed off to Boots like a woman possessed two days before my planned section (for medical reasons – but that a whole other post) and purchased this. My husband thought I had completely lost it such was my insistence to get it before the baby arrived.

Fast forward to the arrival of my little man. I enthusiastically took Ewan from its box the first night we got home secretly hoping for a full 8 hours sleep!!! Needless to say that didn’t happen.

The sheep itself, glows a red/pink colour which is supposed to soothing for the baby, however you can turn this feature off. It makes a number of different sounds such as a heartbeat, rainfall, hoover and what they call a womb sound which apparently mimic the sound the baby hears in utro. The sound itself plays for a decent length of time to allow baby to (hopefully) drift off to sleep. It comes with a strap that you can attach to the cot or car seat which is really handy.

Well, how did I get on with it……there is nothing wrong with the product per se, my newbie just didn’t like it, he fussed and fussed when I had it on and settled better with it off. Tried it a couple of nights but no joy. With a heavy heart I dispatched poor Ewan to the wardrobe. About three weeks later, my almost 3 year old saw him and decided he wanted him, ( he went through a week or so of a phase where he just had to have everything newbie had, from teddies, to soother to bottles – thankfully we are passed that phase now!) so for the sake of peace I said he could have him.

Now…..here is where things get interesting. He took him to bed that night and had a great nights sleep, a full 12 hours in his own bed. He just loves the soft red/pink glow. Up until this point we still had a few nocturnal visits a week at around 5 in the morning. Since Ewan appeared in his bed, we now have hardly any visits, coincidence or not??? I just don’t know but I do know one thing, I am not going to take Ewan away just in case!! The benefit for an older child is he knows how to turn on and off the light and the sounds.

This would be one option for a gift for a new born or toddler but there are may more great ideas especially when it comes to buying baby gifts online.

In the end all was not lost. I purchased Ewan in Boots however it is available in many baby stores and online through sites such as Amazon.

Imaginative Play during the summer holidays thanks to Casdon