The Royal Canal Greenway, is a scenic 130km walking and cycling amenity stretching alongside the historic 225-year-old canal, officially launched on 24 March 2021.  The €12 million project co-ordinated by Waterways Ireland is the country’s longest Greenway, traversing through Kildare, Meath, Westmeath and Longford. Those wishing to experience the Royal Canal Greenway are advised to adhere to Government guidelines on movement and social distancing. We fortunate to live close to its starting point so looking forward to the easing of restrictions to be able to explore more of this new amenity. 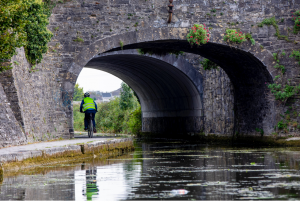 The Greenway is a former towpath for barges featuring 90 bridges, 33 locks, 17 harbours and four aqueducts. Greenway users can choose to complete the entire 130km flat, off-road trail in one visit or explore the shorter designated routes — ranging from 6km to 15km — between the 14 connecting access points and towns.

High-profile attractions linking onto the Royal Canal Greenway are trails to Carton House in Maynooth; Corlea Trackway Visitor Centre — one of the largest prehistoric roads in Europe — in Longford; and Center Parcs. The 165km self-guided National Famine Way also travels largely along the Greenway, following the footsteps of 1,490 emigrants who walked from Roscommon to Dublin at the peak of the famine in 1847.

The Greenway has been completed in partnership with Waterways Ireland; the four local authorities of Kildare, Longford, Meath and Westmeath County Councils; the Department of Transport, and Transport Infrastructure Ireland.

The Royal Canal Greenway also forms part of EuroVelo 2, a 5,000km “Capitals Route” that passes through Ireland, the UK, the Netherlands, Germany, Poland, Belarus and Russia.

For more, including the maps and information on points of interest visit www.royalcanalgreenway.org