Top things to do in the Canary Islands

Many moons ago in our pre kid days we spent some wonderful long weekends in Lanzarote with a couple who we are great friends with. With 6 kids between us and an ongoing vow to return en masse we just haven’t had the change. Skimming my inbox last week a press release from Travel Media really caught my eye “Top ten things to do in the Canaries“.  With kind permission I have included their fantastic guide below. Given holiday season is almost upon it, I thought the timing perfect to share this as no doubt a good percentage of you will be heading this direction over the coming weeks. If there is anything you think missed of the list do send on or comment below.

Get to the top of the Teide Volcano in Gran Canaria

Just after Mauna Loa and Mauna Kea in Hawaii, Mount Teide is the third highest volcano in the world. Located in Gran Canaria, it’s tone of the most visited natural parks in Europe and the 8th most visited in the world!  If you opt to take the cable car which travels within 500 meters of the summit – prepare yourself for some simply breathtaking views. 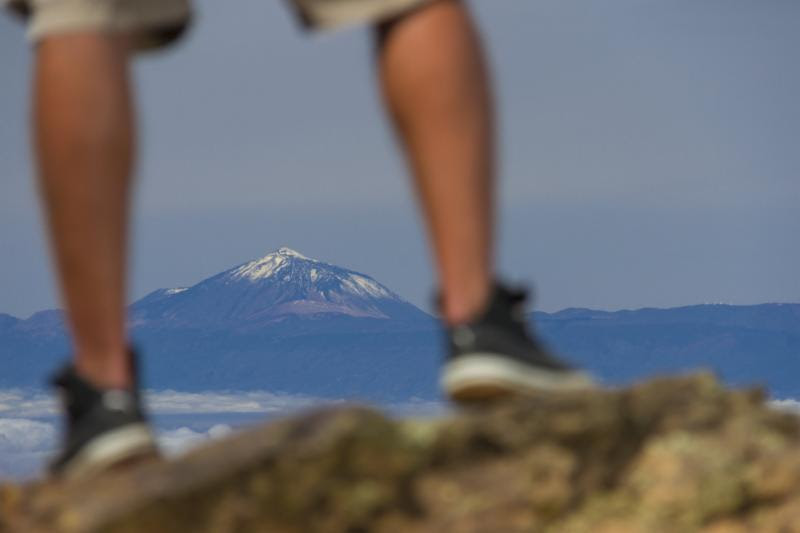 Climbing Mount Teide is also an option as well as a dream for many; ascending the crater and smelling the sulphur emitted from volcanic fumaroles is a once-in-a-lifetime experience.  There’s a bar and restaurant area, and even a hotel and a refuge at 3.270 meters.

As the highest peak in Spain, it has been a World Heritage Site since 2007, and the park encourages visitors not stray from the marked paths, enjoy the native flora and fauna of this geological treasure, and not to take stones as a souvenir of the National Park.

With wind-sculpted dunes with golden sand and clear, crisp ocean – Maspalomas truly is one of the most beautiful beaches on the Canary Islands.   Stretc 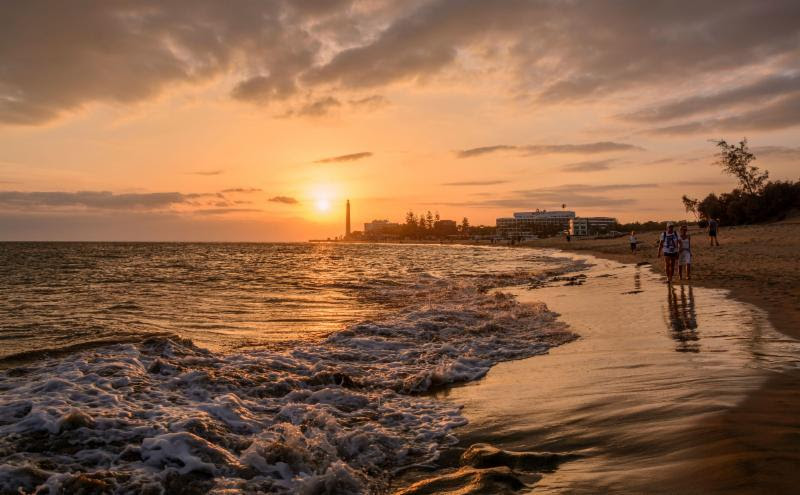 hing just over 3km, the beach makes for the perfect place to sunbathe, to take a relaxing stroll or to simply soak up the sunset in the evenings. One of the best spots to see the sunset is the first set of dunes by the Charco de Maspalomas lagoon.

The beach stretches from the beautiful lighthouse to La Punta, the most southern point of the Island. But, it doesn’t end there! It then transforms into the Playa del Inglés, another 4 km of the finest sand in the east.

Visit the fascinating architectural legacy of César Manrique in Lanzarote

César Manrique was an artist, architect and environmental activist from Lanzarote. He did not create in nature but rather with it, and his relationship with the landscape was not simply aesthetic but also a commitment to defending the environment.

Jameos del Agua is a volcanic tube opened on the surface where you can admire a natural lagoon of transparent emerald waters which is home to a native species of the island – a minuscule, albino, blind and gleaming little crab of unknown origin. 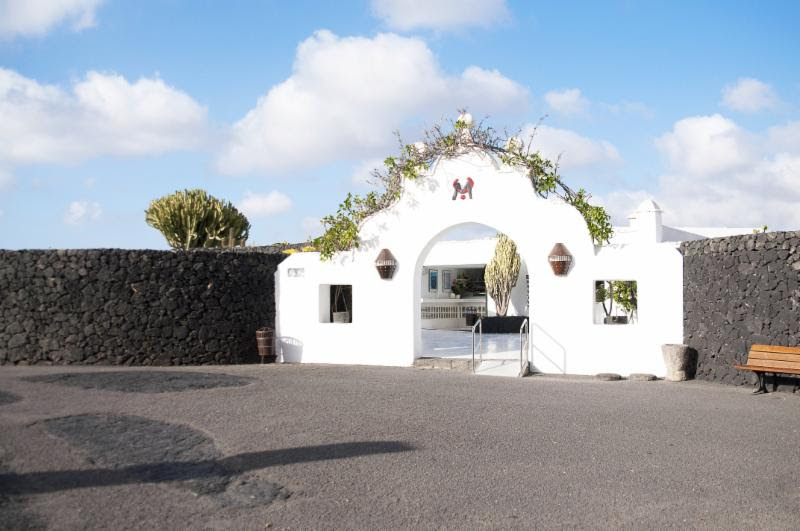 Mirador del Rio is a building located at 500 meters in altitude at the top of the Risco cliff, hidden beneath the rock and barely visible from the outside, with large windows and exterior balconies that provide a stunning view of Lanzarote.

Visitors can see traditional ceramics and a range of sculptures. The domed main room and cupolas are not to be missed.

The Canary Islands have become an exceptional wine-producing region due to the volcanic nature of their soils and almost desert-like climate. The ash coating retains moisture, protects buried soils from erosion, inhibits evaporation, and traps solar input. 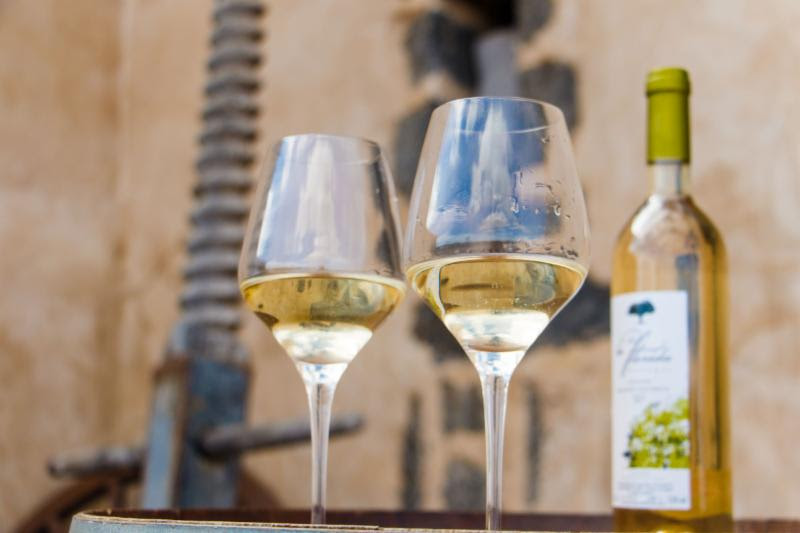 Partially ringed by almond shaped stone walls on tar dark soils, the vine arrays appear hauntingly gorgeous, and many of them are included within Timanfaya National Park in the southwest.

White wines are predominant in the Canaries and are often opulent and full, sometimes with a citric precision.
Whereas red wines often have a Burgundian heft of pepper and complex darkness-leather, mocha, black fruit, caramel and even diesel.
Several wineries across Lanzarote offer both wine tastings and visits.

The spa centres in the Canary Islands are well-known and make full use of all the natural resources provided by the Canary environment. Plenty of unique treatments are offered such as thalassotherapy, geotherapy, wine therapy or aloe therapy. 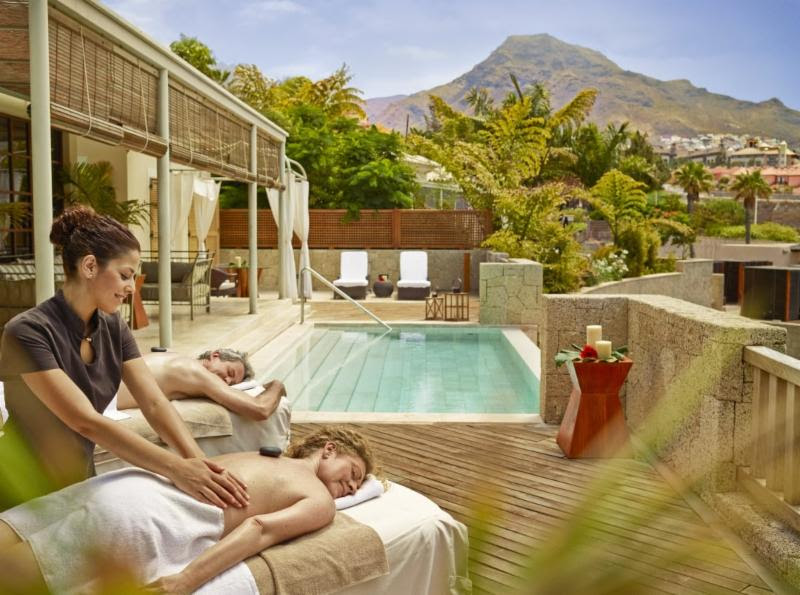 The spa of the Iberostar Grand Mencey in Santa Cruz de Tenerife is set over 4500 square meters, and facilities include everything from a dynamic heated pool with bubble beds, whirlpool sections, and aqua-massage swan necks, to saunas, a foot spa, and a steam room. Sounds like my ideal kind of holiday!

Watch the stars from a world class observatory in La Palma

The sky of La Palma is one of the best places to observe the stars, and the Roque de los Muchachos observatory at 2.396 m. above sea level is home to one of the most extensive fleets of telescopes to be found anywhere in the world.

It boasts a breath-taking view of a giant volcanic crater 1,500 metres deep, covered in trees and with volcanic rocks in amazing formations.

The observatory organises visits to its facilities, and there are stargazing tours by La Palma Astronomy Tours which even include a ‘Tapas and Stars’ experience. The experience combines tapas and a glass of red and/or white local wine with an introduction to the astronomy and the orientation of the sky through constellations as well as insider information from guides.

Eat at a Michelin star restaurant in Tenerife

The stars in the Canary Islands are not just in the sky: Tenerife has six Michelin stars spread across five restaurants. One starred NUB occupies a beautifully restored colonial building and the tasting menu fuses Italian, Chilean and traditional Canarian flavours. 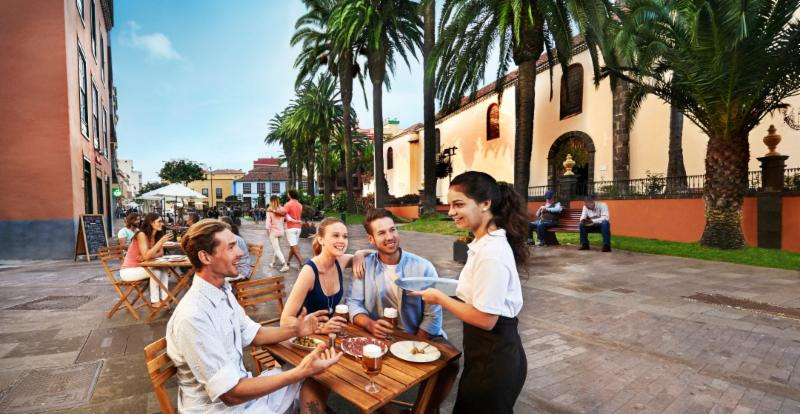 The celebrated Basque chef Martín Berasategui’s M.B. sits in the Ritz Carlton Abama hotel and has two Michelin stars. The restaurant is renowned for its interpretation of Spanish cuisine with influences from the Basque Country and a selection of local ingredients.

El Hierro is the smallest of the Canary Islands and a true Atlantic treasure. Declared a World Biosphere Reserve in 2000, El Hierro also features a marine reserve full of steep drop offs down to 300 meters, shelves, sandy platforms and caves.  As one of the world’s dream diving sites, it hosts more than ten top spots full of volcanic features and marine life. It’s also the perfect place for whale spotting as different species can be seen all year round.

El Hierro is also a model of sustainable tourism and fishing, and a renowned clean energy lab which gets almost 50% of its energy from renewable resources. 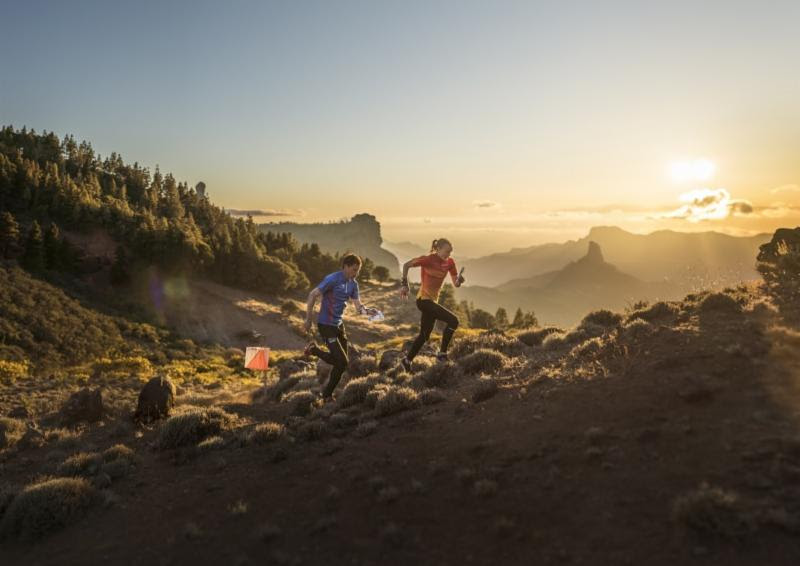 It is the perfect place for hiking thanks to a network of over 600 kilometres of trails.

The island was awarded World Biosphere Reserve status in 2011, this is thanks to the pristine nature of its marine and terrestrial ecosystems such as the laurel forests of the Garajonay Natural Park.

You’re free to wander the forests on your own or take a guided tour with local experts.

Take a surf or kitesurf course in Fuerteventura

Fuerteventura is well known for its 150 km of white sand beaches and emerald green waters, a paradise bathed in sunshine, perfect for relaxing and water sports.  The North of the island offers world class breaks for surfing but also less demanding spots for learners, whereas the South is swept by reliable winds all year round which together with flat seas offer some of the world’s best conditions for kite and windsurfing.

Thanks Travel Media for the fantastic guide – I just want to go book a holiday!

Planning a short hop to the British Isles? Here’s what to see