A trip to Melvin Brewing is on our list

I’m guessing it must be our Irish blood but we seen to end up visiting brewing companies/ breweries quite often on our travels!! We did in Iceland and on our visit to Niagara Falls also.  Next stop this year we are aiming for to visit friends of ours near Alpine, Wyoming. I must admit, to my shame I knew so little about Alpine. So turned to Wikipedia to learn that Alpine is located at the southern end of the Snake River Canyon where the Snake River enters Palisades Reservoir. The town is also known as Alpine Junction since it marks the point where US Route 89 and US Route 26 turn in opposite directions.  Wikipedia, also tells me that Wyoming itself   is a state in the mountain region of the Western United States. The state is the 10th largest by area, the least populous, and the second most sparsely populated state in the country. Wyoming is bordered on the north by Montana, on the east by South Dakota and Nebraska, on the south by Colorado, on the southwest by Utah, and on the west by Idaho and Montana. I have a look on line and Insta and the places looks very picturesque, exactly like the kind of holiday we enjoy. 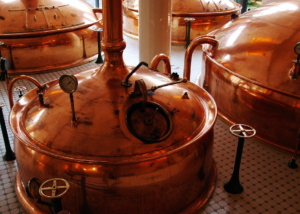 We haven’t booked our flights yet but my friend seemw to thing the lure of Mevlvin Brewing Company will be enough to entire us all over! I had a nosey on line and loved their story. According to their bio Melvin Brewing was born in the back of a Thai restaurant in 2009, when owner Jeremy Tofte decided to bring beers from the future to Jackson, WY. Their 20-gallon brew system quickly grew into a 3 barrel system, and they served our award-winning beers — the original Melvin Brewing IPA, 2×4 Double IPA, and Ch-Ch-Ch-Cherry Bomb — with sides of Asian street food, kung fu movies and old school hip-hop.  Their mantra appears to be  “that when they engage through music, beer, and fun in a safe environment, Melvin Brewing will create lasting impressions for their current and potential customers.”

My love of all things Asian is no secret and nobody where we go my heart always long to go back to experience some of our Asian adventures. Back to beer! I understand from history.com that beer can trace its origins back over 12,000 years. Wow that’s pretty incredible. What’s also pretty incredible is how Melvin Brewing win “Best in Show” in pretty much every Brewfest they enter. Who doesn’t love accolades!!

I also see Melvin Brewing have done some pretty cool collaborations too:

What to Take With You To a Rave

5 Signs Your Child is Unhappy at School

3 Things You Need to Consider When Opting for Additional Help