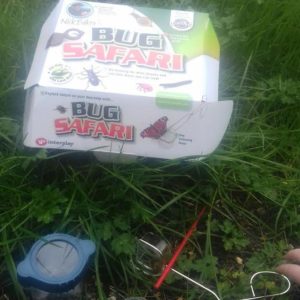 I am (irrationally!!) terrified of all sorts of creepy crawlies, therefore the Dada Fairy was dispatched to try out Inter Play UK Bug Safari with the kids.

The set itself contains:

The kids took their Bug Safari kit off to the local park to for their bug hunt! I sent them off with the warning that they weren’t to take any bugs home!! I had a quiet couple of hours while the boys hunted! I can happily report that I didn’t see any of the finding of the bug hunt as all were returned to their environment following investigation by my little explorers.

The boys would spend every waking minute outdoors so I had a feeling this would be a hit and it was.  They loved the magnifying pot which stored their loot for closer inspection. The bug tongs was apparently very handy for getting them into the pot!  I think this is a great product, contains all the tools you would need including the useful little book that comes with it.  Particular thumbs up from the Mamma Fairy house for the magnifying pot.

I can foresee this getting lots of play in our house especially over the Summer months. However do return the creepies back to their homes after inspection!

Note: We were sent the Bug Safari to review however this in no way influenced mine (or the kids in this case) review of the product.