This story was prompted by a video I saw recently, talking about Untold Stories. I have a story quite similar, but I was almost afraid to share it  as I though my story isn’t about overcoming adversity, or  health issues or traumas.

My story is old school romance that would warm even the coldest of hearts.  There are people in this world who leave a lasting impression where ever they go and with whomever they meet.  This story is about two of those people.

Take a seat! Make a cuppa and grab some tissues. 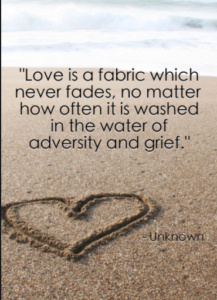 he scene – its the early 1950s bad boy meet upper class girl, girls family disapprove. Bad boy gets the hint and runs away to the Navy.  Lets roll on five years.  Bad boy returns to his old stomping group and bumps into said girl. She is upset, very upset. She was engaged to be married the following month. She had just found out her husband to be had a gambling problem and had just sold the furniture of the house they had planned to move into when they got married to pay his debts. She was distraught.  She is comforted by bad boy, two years later they were married and thus began one of the most romantic love stories.

So who are they? They are my dads parents my Nannie and Granada. Their remarkable love story doesn’t end there.

They were the epitome of the popular hash tag used today of “couple goals”. My Granada had a deep love and respect for my Nannie that reflected in everything he did. She got breakfast in bed  almost every morning, her toast cut just the way she liked it.  He opened doors, he pulled out chairs, a gentleman through and through.  If my two boys grow up to respect woman even half of what he did ill know I did my job well.

Lets jump to the 1980s their two kids grown up and married themselves (one being my own dad). The house now empty except when the growing number of grandchildren come to visit to be utterly spoilt.  One morning my Nannie was outside cleaning as she would have done probably every day, she was incredibly house proud. You could have ate your dinner off the glistening floor.  However this day was different, having finished clearing the back garden she looked down and her wedding ring was gone.  She always took off her engagement ring for safe keeping when she was cleaning but never her wedding ring.  In fact she often said she never took it off from the minute my Granda put it on her finger when saying their vows all those years ago. But it was gone. She was utterly distraught.  My Granda searched, the neighbours searched but it was not to be the ring was gone. My Granda bought a replacement ring a couple of months later.  While my Nannie wore it everyday it just wasn’t the same for her. She always believed she would find her wedding ring, countless hours weren’t spent over the next few years looking for it out the back garden in the vain hope her instinct was right.  When she told the story I used to remark she would say the ring was misplaced – not lost, just misplaced.

Ten years later and my Grandas world came crashing down, my Nannie, his beloved wife passed away. I was only young yet I remember it like it was yesterday. My Granda gave me the locket that he gave her before they got married, the date of July 1956 inscribed on the front and black and white pictures of my grandparents when they were 21.  That is my most treasured possession. 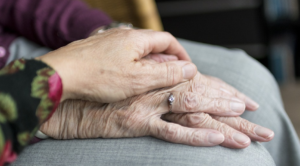 From memory it was about two years later when my Dad came running in from the hall way after being on the house phone. My Granda had been out cleaning the shores in his back garden that had become blocked and had found my Nannies wedding ring.  That same shore my Nannie had cleaned multiple times over the previous ten years. None of us could believe it but she was totally right all along, it was never lost, just misplaced.  For a ring that had spent ten years lodged in an outside drain it was still in almost perfect condition.   I actually have tears in my eyes just thinking of this story again.

The ring had been sitting in a little crack just below the shore in their back garden all this time, it was like something out of  movie. It was like a dark cloud lifted from my Granda and from that house that they spent so many happy years.  That was the turning point, he knew then everything was going to be ok.  She was watching over him. He guarded that ring with his life from that point on ward.

My Granda, my best friend passed away in 2015.  I have written about him before.  He was the kind of man that left a lasting impression wherever he went. What I would give for five minutes more.  Maybe one day who knows.  As I write this post that ring that has been on quite the adventure sit proudly on my right hand where it will forever stay until I can pass it to the next generation. That ring could tell some stories…

When my Granda died a good friend bought me a  necklace with the words “Miss me but let me go”, my Grandas last words to me were not to worry that he was ready to go that he lived his life and I was to make sure i did too…….I do try to follow these words…… the missing you is easy its the letting go that will never be.

I guess there is a lesson for us all there.  Life is to be lived – there is no trial run, no second chance.

Crying Baby: What To Do When Your Newborn Cries