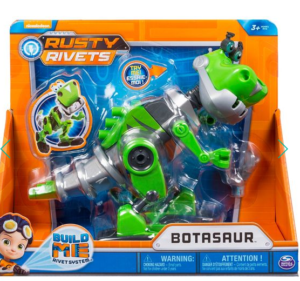 My youngest is a Rusty Rivets fanatic! I’m not quite sure which part appeals to him the most but he really is a super fan! Before Christmas Botasaur landed in our post box and he was mega excited.  Botasaur retails at around €35 which puts him (in my view) at the pricer end of kids toys however I can see why he is a little more costly than the average character toy.

If you have ever watched the show you will know Boatasaur is one of the main characters in the show and is Rustys side-kick. I think him forming such a pivotal role in the programme is a huge influencing factor in his success at least here in the Mamma Fairy house!

So what doe he do!! Botasaur comes in parts that you piece together to bring him to life – just like in Rusty Rivets! 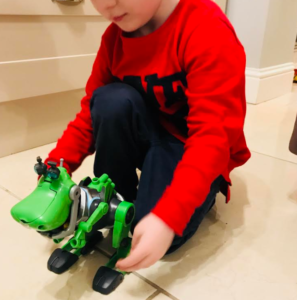 Parts included are: 1 Head/Body, 1 Torso, 1 Tail, 1 Spine, 2 Feet, 2 Legs, 2 Arms, 1 Seat, 4 Big Wheels, 4 Axle Hubs.  He is definitely a good size for little hands.  When you press the  button on the back of his head and his eyes will light up and flash and he makes Botasaur sounds the same as the programme.

What I like about this is that the parts are durable, easy to assemble and dis-assemble making lots of combinations of parts possible. There also isn’t loads of small parts, I found with very young kids (mine is almost 4) he gets so upset when he looses parts but with few and large parts this isn’t so much an issue.  Big plus with toys that come into our house will always be that they spark imaginative play, which is critical for developing little minds. Thumbs up from the little men in the Mamma Fairy House!

A pet hate of mine is toys requiring batteries that don’t came with batteries, thankfully not the case here, its does come with  3 LR44 batteries.

Note: We were sent the toy for review however all view are mine or the boys where appropriate.