The Canary Islands that everyone is talking about

Its a strange new world that we are day by day getting used to. My kids have been travelling since they were months old.  They are very lucky despite being so young to have seen so much of the world.  However it has been very hard for them to process this world where they cant see their friends or hug their grandparents. It such a huge departure from the free range life they lead. One of the things we have been doing as part of our home schooling is making an effort to learn more about the countries we are hoping to visit in the future. This week prompted by a very interesting press release we turned our attention to the Canary Islands. I was very interested to see the islands of La Gomera, El Hierro and La Graciosa or, the “Covid-19 free” islands, are leading Spain’s de-escalation from the Covid-19 lockdown.

With my interest well and really grabbed, I wanted to delve deeper into these three islands……..

La Gomera was awarded UNESCO World Biosphere Reserve status in 2011 thanks to the pristine nature of its marine and terrestrial ecosystems. La Gomera is known as the most magical of the Canary Islands and is home to species that cannot be found anywhere else. It’s also renowned as a hiker’s heaven! The islands highest peak is found in Garajonay Nati 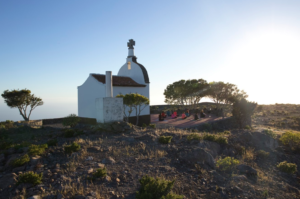 onal Park – UNESCO World Heritage Site since 1986. The park is covered in low-lying fog which creates a perfect microclimate for one of Europe’s last remaining cloud forests. This green paradise stands at the heart of La Gomera’s 650km network of beautiful walking trails.

Situated just 40 minutes by ferry from the southern coast of Tenerife, La Gomera is home to a perfect combination of lush green forests, black lava palm-studded beaches, ancient forests and banana plantations. Its capital, San Sebastián, is full of history and is famous for being Christopher Columbus’ last port of call on his voyage to America.

One of the most captivating features of La Gomera is the Silbo Gomero, its unique whistling language. Recognised as part of the Intangible Cultural Heritage of the Humanity, this pre-Hispanic language has been used on the island since ancient times to communicate over long distances.

El Hierro aims to become the first island in the world that will be 100% sustainable within the next four to eight years. For now, El Hierro, the westernmost island of the Canaries has already set a world record. In Summer 2019, the island reached the milestone of covering the entire population’s energy needs for 24 days using only renewable energy.

El Hierro is the second smallest island of the Canaries and is world famous for its spectacular underwater scenery and wildlife. La Restinga Marine Reserve is an international acclaimed diving sanctuary frequented by numerous animal species. The volcanic eruptions that took place between 2011 and 2012 led to a regeneration of the seabed that gave rise to a very interesting biodiversity. El Hierro boasts the best diving area in the Canary Islands, where you could find dolphins, turtles, stingrays, barracudas, peaceful white sharks and more.

Charco Azul is without any doubt one of the most spectacular bathing spots in El Hierro. Located in El Golfo, a magnificent valley along the rugged coastline, this natural pool is one of the finest examples of the famous volcanic flows.

The island’s 268 km sq. of beautiful landscapes captivates visitors with the contrast between the dark volcanic ground and lush green forests. Be sure to include an excursion to El Sabinar on your adventure to El Hierro. This famous open forest is full of indigenous juniper trees with twisted trunks due to a never-ending battle with the trade winds.

La Graciosa – An Oasis of Tranquillity

Located to the north of Lanzarote, La Graciosa is the least explored and the most peaceful island of the Canaries. 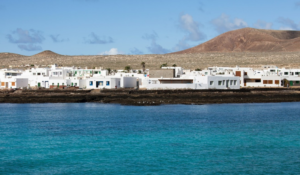 The spot of only 700 inhabitants is a protected area included in the Chinijo Archipelago and has not registered a single case of COVID-19 since the pandemic began. Its golden sand virgin beaches are now wilder than ever, its volcanic landscapes remain untouched and time seems to have stood still along its fishing village.

Did you know that La Graciosa is one of the last places in Europe with no tarmacked roads? This oasis of tranquillity can perfectly be explored on foot or by bike. Within a less than an hour walk from Caleta de Sebo, La Graciosa’s main city, visitors can find the most popular beach on the south of the island, La Francesa Beach. Its golden sand and glistening waters are of an outstanding quality. AlsoPlaya de la Cocina and Playa de las Conchas look amazing too.

Note: Thanks to Islas Canarias for introducing us to these wonderful lesser known islands. Cannot wait to visit some day.

Rediscover the beauty of Ireland with Google Maps

Holiday day dreaming – where to next?

The Allure of the Algarve – summer holiday planning