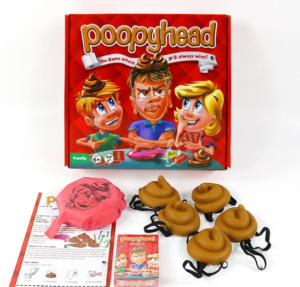 When this gem came through our letter box, the paper torn off it queue squeals of delight. My pair are at the age now where toilet humour is sure to be a big hit!!

If you thought the name Poopy head generated excitement how about head bands with poo (!!) and a whoopie cushion well now…….we were at needing ear plugs excitement here.

The game comes with 5 headbands with a poo (!! – yes i know!) on it, a whoopie coushin and some playing cards.

Despite going through the rule multiple times with my pair,  I think they found them a little hard to grasp. Its a game of speed you need to put down the cards as quickly as possible and in the right  sequence: Toilet, poo, Toilet Paper, Washing Hands and then when a player has no more cards left to play you then must hit the whoopie cushion. The winning player is the player with the most cards left who then get a poo head band ( i cant believe I am writing this!!)  and then a new round starts.

Despite my pair showing a blatant disregard for the rules of the game they thoroughly enjoyed this one and to be fair as did I.  The sheer idea of Mama with a poo on her head was just too much for them!! I would give this one a big thumbs up as a party game, guaranteed to get the kids laughing.

Note: We were sent the game to review however all view are mine or the boys where appropriate.

Meegos – The new collectable in town??