Its good to be bored….

This morning at the football sideline (the place of all great debates lately) the conversation naturally drifted to Christmas and what the kids were looking for. By way of context the kids at this football class are between 4 and  7 so pretty young.  There was emphatic agreement that the less technology the better and that we would try dis-way the high end tech (for lots of reasons) for another few years. 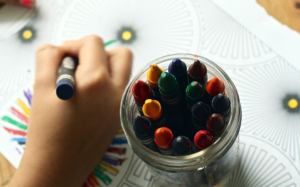 I recalled some research conducted by  BIC® as part of its Young Artist Award, the study found that kids complain about being bored on average 122 times a month – that’s 1,500 times a year. With the words “I’m bored” being dreaded by 69% of parents.  In response to the findings, renowned child education consultant Dr Martin Stephen said that “boredom is a brilliant platform from which children learn to use their imaginations …. It’s important that we continue to develop core skills such as drawing and writing.” I couldn’t agree more. I recall myself as a child spending hours either outside playing or colouring/ painting (aka making a mess).  With a world so consumed by all things tech it can be hard to to do this.  I remember at a talk up the school where the Principal mentioned for kids nowadays the world exists almost like 5 minute you tube sound bites which is actually a little scary. Life isn’t fast paced, its slow and steady with boredom being an essential component to encourage kids to think outside of the box and figure out themselves what to do.

I have set out below some additional findings which I think are really interesting and perhaps even for some of them possibly understated!

What do you think, do you restrict your kids tech or do you give them free reign? Love to here more in the comments below

Supporting Your Child with their Mental Health

How to Motivate Your Child to Learn