Single Parent days out deals or not!

Having a family travel blog we get lots of queries via email, DM and across social media on our adventures and days out. I am very much a bargain shopper when it comes to travel and days out making use of sites like Groupon to get the best value 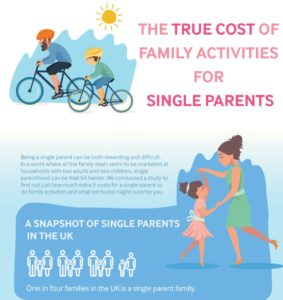 One cohort of emails that I often received when I do post a deal or good offer or blog about the activity always  strikes a chord with me.  That is the disparity of prices in the deals that I share for “family” 2 +2 offers and families which comprise of a single parent. PayPlan who are a free debt advice provider have produced a very useful infographic which looks at the true cost of activities for single parent families. Ill be very honest its not something that I had ever considered before but know it really is something I will be very aware of when sharing deals. 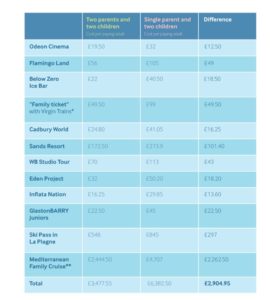 PayPlan have produced an infographic which shows the results of their own research into the cost of family activities comparing 2 parent plus 2 children deal when compared with the cost of two parents plus two children. The infographic is reproduced below with kind permission and the results will shock you. The family train ticket cost difference I found staggering.

Other statistics they found include; which I really I really didn’t know was that 1 in 4 families class themselves as “single parent” and a statistic which I find really upsetting is that – a third of children with a single working parent family live in poverty. I find that so sad.

The research found that most single parent families were headed by a single mother and that one in ten have used payday loans or foodbanks to get by.

There is a useful hashtag #CostOfSingleParentLiving where you share your experiences and read about other peoples.

The results of their research found that being a single parent will cost you more in every instance. I had to read that a second time to really process it. So shocking.

Unfortunately I don’t have the magic solution to how this could be rectified and while I doesn’t impact me directly I feel its important to raise awareness of this issue.

Practical Tips for Working from Home with Children

5 Benefits of Living in a Memory Care Community