My oldest loves Star Wars and with all the hype surrounding the latest in the series and being that bit older now he is really into it.  We were sent two adorable Star Wars characters for the boys to review. The owl like guys are known as Porgs and they first appeared in the new Star Wars Movie: The Force Awakens so very topical. 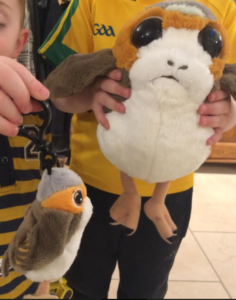 Just look at those eyes!!! Pic: The Mamma Fairy Blog

I had to ask my better informed brother in law about these cute and cuddly Porg creatures! I am reliably informed that the Porg characters in the film have become somewhat of an internet sensation due to how cute and cuddly they are.  He reckons commentators were saying they were the real stars of the film!  I also believe they were inspired by the puffins that live on Skellig Michael in Kerry, where the final scenes of The Forces Awakens were shot. How cool is that.

We were sent two of them the 10 inch tall version and the keyring sized one. My oldest immediately nabbed the bigger and the little guy took the keyring one and utterly adorably they claim they represent each other the big and small one.

If you have a Jedi in your house we can definitely recommend these guys. The fur is so soft and the character very true to life as they are in the film. My oldest has him sitting on his bed every night since they joined the Mamma Fairy house.

The lovable character is made of super soft fur and is 10″ tall, making him a real collectable item for any little Jedi Masters like my pair! The little guy is about 7cm and ideal to clip on school or sports bag.

Note: We were sent the Porgs to review however all views are mine or my boys were appropriate.