For those travelling this bank holiday safe motoring. For those staying put like ourselves, below are some Netflix picks to keep the kids entertained over the long weekend.

So lots of variety to keep the little ones entertained.  See some of our previous Netflix posts here and here to see what else has been keeping my little men entertained on Netlfix over the last couple of months.

Netflix also has plenty family shows and films, some of our favourites include the Fireman Sam movie, Charlottes Web, Shark Tale, Chicken Run and the Shrek films.  Keep an eye out for Beat Bugs which launches on 3 August. Im looking forward to this myself! 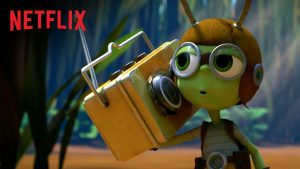 Im looking forward to starting to watch Strager Things. Have heard so much about this series so cant wait to get stuck in! Its a Netflix-original drama staring Winona Ryder.

There is plenty to keep kids and adults alike entertained this long weekend.

Tips to Consider when Sourcing Childcare