Gothenburg with kids – A weekend visit

At the end of August we visited Gothenburg for 3 nights. It’s a city that wasn’t really on my radar up to that point but the lure of €9.99 flights from Ryanair made it very appealing! So with very little research I pressed book and we were heading to Gothenburg!  Gothenburg city is the largest non capital city in the Nordics and is located on the west coast of Sweden. It took just over 2 hours from Dublin which is perfect for a city break with kids.

How stunning is the reception of Gothia Towers Pic Credit: The Mamma Fairy

There are a myriad of hotel options available in Gothenburg and it was hard to narrow the selection down. With it being a short break, kids in tow we knew we needed a central location.  We fell for Gothia Towers. This hotel is the largest in the Nordic region with a staggering 1,200 rooms, 8 restaurants including  Heaven 23 located on floor 23 with impressive views over Gothenburg.  The hotel comprises of three interlinking towers covering a vast 180,000 square meters.  Its hard to miss the swimming pool literally overhanging the street! Be warned if travelling with kids its ages 16 up for admission.

I would not normally be a fan of these big hotels however between the location, the services and the Trip Advisor rating we decided it was hard to pass this one.

The location can’t be beaten it is located across from Liseburg which is a beautiful amusement park which has been open since 1923. Its also within walking distance of Avenyn which is the main street in Gothenburg. Both close by and within the hotel complex there are many options for food and drinks.

We had a family room with two double beds and 2 bathrooms which more than met our needs it was really big and spotlessly clean. Breakfast each morning was served on floor 29 which the kids really loved. Breakfast was so tasty and plentiful and really did fill us for the day. There was a great selection of breads, hot food and cold meats.  We tried two of the onsite restaurants and one of the bars:

Knowing our time was short in Gothenburg we wanted to make the most of the few days therefore we planned our days using the Gothenburg City Card.   We had the 48 hour Gothenburg card which included all of the below. 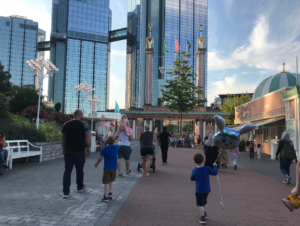 The view of Gothia Towers leaving Liseberg. It really is some building. Those three towers comprised the hotel. Sunning. Pic Credit: The Mamma Fairy Blog

Our hotel overlooked Liseburg so we knew that was a must.  Kids woke up excitedly the first morning dying to get going across the road to Liseburg.  The Gothenburg City Card includes the entrance fee but you do need to pay for the some of the other attractions on site. We didn’t sample the more adventurous rides like the Balder (the wooden rollercoaster) or the utterly terrifying looking Loke. I am no thrill seeker and the boys being under the height requirements I gladly only went on the tamer rides like the tea cups, bumper cars and the ferris wheel which was actually my highlight.

This park is busy and really big so give yourself plenty time. There are lots of restaurants and food options on site of if you are looking for something high end or a nice cocktail afterwards pop over to Gothia Towers.  I would probably say if travelling with kids it would be real shame to miss this old school amusement park.

With the hotel being so close to Liseburg there was a hop on hop off tour stop just at the hotel which was perfect for us. We used to tour bus almost like our transport for the few days.  The commentary was available in all languages and it was a lovely way to see the city in the 29 degree heat from the top of the bus.

The kids just love the water so I knew once they saw this we would have to do it. The weather was really in our favour which made this trip even more enjoyable. The Padden sightseeing tours date back to 1939 and are somewhat iconic in Gothenburg.  The Padden boat is completely open and seats 88 people. The tour itself last approximately 50 mins.

Our guide was funny and entertaining and the kids really enjoyed. We toured under 20 bridges then out into the harbour. It was really special and definitely one not to be missed.

We had an evening flight home so we decided to save our trip here until the day we headed away. Universeum is also located directly opposite Gothia Towers so once we checked out we headed over. Universeum is Scandinavia’s most visited science centre and when you step inside its easy to see why. You literally step into 18,000m³ of lush urban jungle at the Rainforest and immerse yourself in the wildlife, plant life and exotic landscape. Living in here are monkeys, butterflies, frogs, sloths, birds & caimans and you get a breathtaking view from the Kapok Tree, 25 meters above ground. It’s pretty spectacular. There is also a dinosaur area, ocean area and space area. We thought we would spend 1-2 hours here, in reality we spend almost 4. There was just so much to see. If you have younger kids this is another one not to be missed.

This one  we quite literally stumbled upon this places as we made an ice cream pit stop outside.  Entry is completely free and it is one of the largest botanical gardens in Northern Europe. The cultivated part occupies 40 acres of land which is very impressive for the middle of the city. Its a lovely spot to wile away a few hours. We had some lunch sand drinks to cool off at restaurant close by.

This is the main shopping street, the above is its official name but known to locals and tourists as Avenyen. Its a lovely spot to explore some local restaurants and cafes and do a spot of shopping.

Note: Thanks to Goteborg.com for all their help and support on this trip

Ensuing your car is winter ready