The Christmas toys one month on

Last year I wrote this post which proved really popular. We had a look back 2 months on from Christmas at which toys were the hits and which were the miss! Its funny how sometimes the unexpected toys/ gifts become the most popular.

Starting with the ones still in pretty much daily use one  month on: 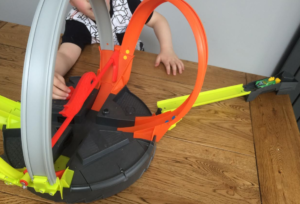 Hot wheels are a really big thing amongst my 5 years old’s school pals so I had an inkling this was always going to be popular and I was right. Its probably the first toys himself and his pals gravitate to when they come in the door.  The set comes with 2 hot wheels cars but no batteries included as we found out on Christmas day (it takes the size D ones so not that likely to have them lying around!).  Its almost like a battle where you have to launch cars at the same time strategically into the rotating set.  Queue meg excitement here when they get the timing right as it loops around the set and crashing into your opponent’s cars in no time. The last car on the track wins. The track is compatible with the “track stars” individual cars you can purchase in Tesco, Smyth’s etc. The boys love this, its fast, action packed and generates a lot of noise and excitement.

Only downside I can see (aside for bad mammy forgetting batteries) is it does take up quite a bit of space.  The track set is available in most toys shops and a good purchase in my view. Currently selling for €39.99 in my local Smyth’s. 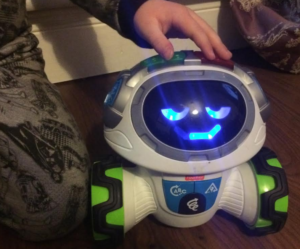 This little guy is utterly adorable and enjoyed equally as much by the 5 and the 3 year old.   He is billed as being super mobile with 360 mobility and that he has.  He is really fun, he encourages kids to get active and follow his directions, not an uncommon sight to see the kids dancing around the kitchen following Movi’s lead! There are 6 different  games to choose from​ where Movi asks the question and encourages the child to think of the answer and interact with the push buttons on  his head.  Movi has great facial expressions!

What the kids love about this is how interactive it is, they like to follow his tasks and love to practice dance moves with him. If only they would listen to me as intently as they listen to him and follow his lead.  He takes size C batteries which I did actually have so Movi has been part of the Mamma Fairy house for a month now and I don’t see him being resigned to the toy press anytime soon. Its priced at €49.99 in my local Smyth’s. It is really durable he has withstood my Mr Destruction which is the ultimate test of a toys durability I think!!!

It’s a real testament to think a toy first developed in 1974 is still going strong today and that’s despite the fact we live in such a technological age.  We had the junior puzzle so for Christmas we upgraded to the 3×3 version.

He hasn’t solved it yet but its not for the want of trying!! I throw it in my handbag when we are going out as I know it will keep him occupied. Funny thing is we have had lots of comments on it when out and about. I think all us 80s kids feel a sense of nostalgia for this product. At around €10 this money well spent!

Laurence King Make Your Own Spaceships

Build your own Spaceship

This is quite possibly be the most perfect invention for the non crafty among us. The set includes 14 spaceships that you press out and slot together, zero need for glue or scissors .

The set includes 2 blank aliens to colour in yourself which were great fun. Definitely a great choice for any fellow non crafty mums for those rainy days.

Our love of books is well documented and some of those which arrived over Christmas which we are still dipping into are:

And to finish off this years “miss” is…….Gross Science. He wanted this badly, I mean I reckoned if Santa didn’t bring it he would have been devastated.  Unfortunately I think it was just too hyped up in his own head.  While the set comes with a good bit of stuff you needed a lot of extras to complete the experiments. We were away from home for Christmas so we didn’t have a lot of the kind of things needed in the house handy. So as I write Gross Science had joined last years Miss – Soggy Door in the bottom press!!

Looking To Tie the Knot at Sea? Here’s What You Need to Know!

Do Valentine’s Online This Year

To Thine Own Self: Dressing To Be Who YOU Want To Be